The Girl In The Ice – Robert Brynzda 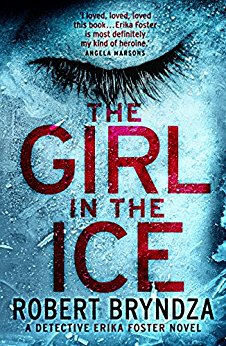 DCI Erika Foster makes her debut in this fabulous series by Robert Brynzda. Set in London, England, DCI Foster is returning to work after an incident on a drug raid left several members of her former team dead, including her husband Mark. Having been sidelined by grief and her own feelings of inadequacy, Foster is brought into another precinct to command a murder investigation.

A young girl has been found frozen in pond ice and has been determined to be the daughter of a prominent London family. Due to the family’s stature in the London community, the investigation is expected to be run low key, in deference to the family, a situation that Erika does NOT agree with. Almost immediately her actions are questioned by both the dead girls’ family, and her commander, s well as the former commanding DCI who relinquished the case to her unwillingly. Erica’s refusal to dismiss a sighting ultimately leads to her removal from the case, forcing her to continue the investigation on her own.

But investigate she does, and soon she finds a witness, who’s information helps build Erica’s theory and sends the investigation that much closer to home. Reinstated, Erica takes advantage of her superiors being out of town to pull of a stunning move – but will she catch her killer or become his next victim??!

This was my first encounter with DCI Foster, but it will not be my last. A feisty, get-er-done Detective, who’s not afraid to buck her superiors to get a job done, Erika is my kind of character! Since this writing, Mr. Brynzda has released several more DCI Foster mysteries, and I aim to read each and every one of them! Great series for mystery lovers!!