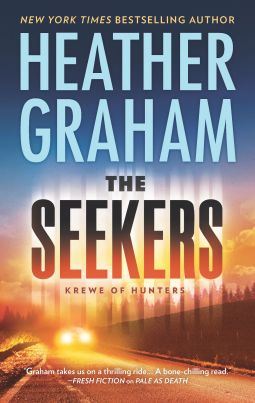 The FBI’s elite Krewe of Hunters returns in yet another paranormal adventure!
Joe Dunhill, former Savannah Detective, is the newest member of the Krewe of Hunters. After having a bit of unexpected paranormal help in solving his last case, and seeking to put his new talent to use, he is tagging along with agent Dallas Wicker as they investigate their latest case.

Keri Wolf is a writer who researches historical crimes and then documents her findings. She has been invited to witness and document the exploration into an old building in York, Philadelphia where a mass murderer reportedly lived and killed his prey. The historical story includes the death of a young woman at the hands of the innkeeper, and her father, so deranged from grief, then killed him and massacred the other inn inhabitants, with restless ghosts still haunting the Inn. Along with the new owner, Carl Brentwood, and the “Truth Seekers’, a crew of paranormal investigators, they also plan to try to validate the haunting.

Shortly after Keri’s arrival, a woman is found dead in the basement of the old inn, her body splayed out on an altar of sorts, covered in blood. She also sees another figure, a woman in white, staring at the body with tears running down her face… before she disappears. The York County Police investigate, led by the abrasive Detective Catrina Billings. When the body is identified as an FBI agent, the Krewe of Hunters is called in to oversee the investigation.

As Keri, Carl & the Krewe join forces and share information, they seek answers as to why an FBI agent from NY has become the latest victim of violent crime in PA and begin to suspect a link in their cases somehow. Meanwhile a pair of old ghosts recognize their intent to set the past right, and do their best to steer Keri & Joe in the right direction…