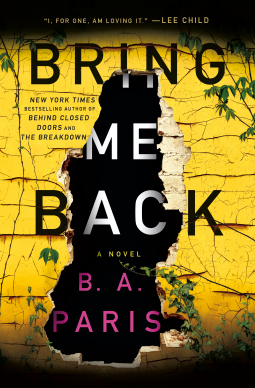 Finn McQuaid is an investment financier of sorts with a prestigous company in London, run by his good friend Harry. He is in a relationship a woman named Ellen, who is actually the sister of a girl he loved and lost long ago, named Layla. 12 years ago, he and Layla were returning home to their cottage after an evening out, and Layla disappeared from a rest area while Finn was using the rest room. No trace of her was ever found.

Now, 12 years later, strange things begin happening that make Finn believe that not only is Layla alive, but that she wants to see Finn. Fist, an elderly former neighbor is convinced that he’s seen her standing in front of their old cottage – empty since the night she went missing, and a memory Finn has not been able to bring himself to sell. Then Ellen thinks she catches a glimpse of her sister in a nearby village. Then the miniature dolls begin to appear.

The story vacillates between past and present, and is told from the point of view of the various characters – Layla reveals the truth about what happened that night, and Finn begins to feel as if he is being forced to choose between the two sisters.

Then, Ellen disappears and Finn rages a frantic search to find her – only to discover that nothing is as it seems, and everyone is a suspect…
This is a novel that sucks you in, and keeps you turning page after pages far into the night, because it’s too good to put down – culminating in a twist you’ll not expect and never see coming! My first read from B. A. Paris, but certainly not my last!!