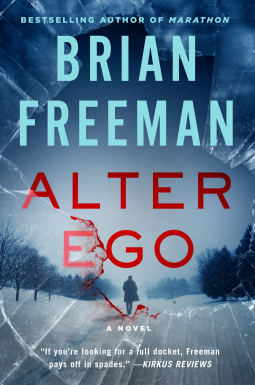 Lieutenant Jonathan Stride and Detective Maggie Bei are back again in this fabulous new novel from Brian Freeman!

It’s winter time in Duluth, Minnesota, and one of Hollywood’s A-list actors is in town filming a movie based on a case that Jonathan Stride would rather forget. Dean Casperson is a legend and is playing the role of the detective in ‘The Caged Girl’, a screenplay crafted by the actual murderer’s son.

The story opens with a chance death on a snowy highway, and it’s thought to be nothing more than a fateful accident, until a recently fired gun is found in the wrecked vehicle. As Maggie Bei attempts to identify the body, they realize that the ID the victim carried belonged to a man who died several years prior. So, who is he?

Stride visits the set of the movie during filming and meets his ‘alter ego’ in the film – the great Dean Casperson himself, along with his look-alike stuntman Jungle Jack. While on set, he inadvertently learns that a young stagehand, Haley Adams, has gone missing. Believed to be a Florida native, attending college in Duluth, her identity becomes a puzzle, as the search for her intensifies.

As the investigations continue and eventually merge, Stride learns that Hollywood isn’t all that it seems, deception is rampant, and even the most beloved of actors may be hiding something sinister, and will do anything to protect his reputation.

And then another girl goes missing…

Freeman has done it again, and I found this book to be un-put-downable!! I’ve been hooked since I picked up his very first Stride novel, and this latest installment keeps me desperate for more!! You will NOT be disappointed!! If you love Harry Bosch, Mac McRyan, Lucas Davenport and Tracy Crosswhite, you’ll LOVE Jonathan Stride!